Besides the constant crushing rejection, the next hardest part of writing is taking criticism. Good writers grow through it, but bad writers either bristle at it or avoid it like the paper is hot lava. It can be challenging, but you have to develop the mindset that criticism and editors are a necessary and indispensable part of developing your craft. Not only that, but the best editors charge for their services, so sometimes access to good editing is a luxury for starving artists. Joining a free workshop or group of writers is a great way to get affordable editing, but sometimes unreliable. At some point, you're going to have to shell out the money for proper editing services.

I recently found a deal on editing from Smokelong Quarterly - $20 for line editing on a flash fiction piece less than 1000 words. The feedback I got from Shasta Grant, one of the senior editors, was not only insightful, but far more extensive than I was expecting. Below, you can see the original version of my story with their edits and remarks. I found the process really helpful and effective, but you can decide for yourselves. I'm including a revised draft of the story, to show how the process works. As you can see, I didn't use every bit of advice, partly because I just didn't want to, but also partly because I felt that fixing some issues also (hopefully) fixed other problems. For instance, I'm hoping that the title becomes more impactful if I played up the denial angle.

In addition, I would be remiss, if I didn't recommend my usual editor, Adrienne Horne at IA. M Editing, Ink. She and her staff do great work at affordable rates, and I've always been happy with her advice, even when she tells me, in Christian love, that the thing is not ready for publishing yet.

This is the original with edits: 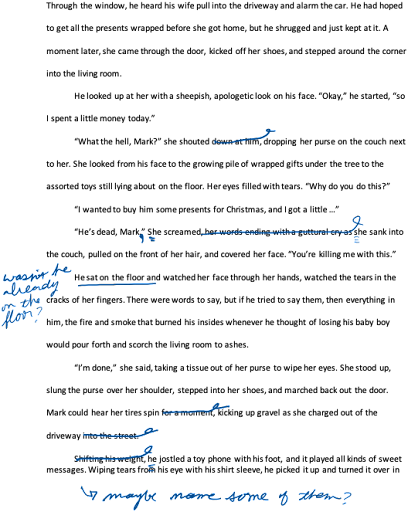 Dear Jeff,
In this story, a father arrives home with many bags of Christmas presents for his son. He sits on the floor and plays with each toy before wrapping it. His wife comes home and he apologizes for spending so much money. The wife says their son is dead. She says she is done and leaves the house. He picks up another toy and plays with it before wrapping it, telling himself that his son would really like that one.
There’s a melancholy tone to the story that is appropriate and consistent throughout. In fact, I knew from early on that the son was not alive because the tone was so effectively done. I like the details about each toy and how the dad imagines his son playing with them. The argument with the mother/wife is also well done, particularly the dialogue. There are many subtle details throughout that make the feel story feel rich and nuanced.
I would suggest bringing more of the father’s life onto the page. Right now most of the story is taken up with wrapping the presents and I wanted to know a bit more about the dad outside of this. Does he have a job? Has he been unable to work since his son’s death? His wife asks “why do you do this” which implies he’s done this kind of thing before and I wanted more about his previous behavior. I think some more information about the son would also help to flesh out the story. How old was he when he died? It’s not quite clear from the toy descriptions whether he was an actual baby or a toddler. Would this be the baby’s first Christmas? Does the “fire and smoke” refer to the way the baby died? Does the dad feel responsible?
I’d also consider giving more space in the story to the argument between the parents. This is where the heart of the story is – in the different ways they are handling their grief and the question of whether their grief will separate them. Are they having money trouble on top of grieving? It seemed odd that he apologizes for spending money, not necessarily for buying all the presents for their dead child. He must have known she would find out, as he was putting them under the tree and there seem to be no presents that aren’t for the son. What did he think her reaction would be? Why did he do this? I don’t fully understand his motivation for it. Is he in denial that the baby is dead?
I really like the phone at the end and wonder if you might use it a bit more. Could the dad pretend to talk to the baby with the phone pressed to his ear? I’d be very curious what he’d want to say to the baby — this might be an opportunity to reveal more about the father and what he’s feeling.
My last suggestion is to consider a different title. I’m not sure if the title of “Play” does justice to the nuanced and emotional story. Maybe there’s a small phrase from the story itself that might work as a title? Or maybe expanding on play would work? E.g. “Playing Trucks” — something that conjures up more of a specific image.
These are just suggestions, of course, and not meant to be prescriptive in nature. Please take what resonates with you and discard the rest. Wishing you the best of luck with this story!
Warmly,
Shasta

And here's the revision. Comment if you think it's improved or not.

“Play”
It took Mark three trips to haul all the bags in the house. When he finished, he sat in the middle of the living room floor, next to an undecorated Christmas tree, surrounded by brightly colored toys and shiny metallic rolls of wrapping paper. Such a rough year, exhausting. He hadn’t been able to hold down a job for months, but surrounding himself with these cheerful toys and colorful bows and ribbons invigorated him, especially this Christmas.
A stuffed bear with crazy big eyes kept talking to him while he tried to wrap it. It asked him to play, sang him a song, recited several different rhymes, all while he sealed it away in the sturdy red paper. When he had finished to his satisfaction, he tapped the foot through the paper one more time and heard the muffled voice cooing to him from inside the package. He smiled “He’s going to love this one,” he thought, picturing his baby boy jabbering back at the bear for hours.
The next toy, a bright yellow dump truck with soft sides, so large it took two widths of the wrapping paper taped together side by side to get around it completely, didn’t make any noise. He just knew his boy would slam it into the walls and furniture as soon as he opened it, putting all of his smaller toys in the back for a ride. So rough, that kid.
Each toy conjured images of his son playing under the tree when Christmas came, and even though he knew the baby couldn’t open even one of those tightly wrapped gifts, he went right on wrapping them, holding them long enough to feel his little boy’s joy and then placing them in the sprawling pile under the tree.
Through the window, he heard his wife pull into the driveway and alarm the car. He had hoped to get all the presents wrapped before she got home, but he shrugged and just kept at it. A moment later, she came through the door, kicked off her shoes, and stepped around the corner into the living room.
He looked up at her with a sheepish, apologetic look on his face. “Okay,” he started, “so I spent a little money today.”
“What the hell, Mark?” she shouted, dropping her purse on the couch next to her. She looked from his face to the growing pile of wrapped gifts under the tree to the assorted toys still lying about on the floor. Her eyes filled with tears. “Why do you do this?”
“I wanted to buy him some presents for Christmas, and I got a little …”
“He’s dead, Mark,” she screamed. She sank into the couch, pulled on the front of her hair, and covered her face. “You’re killing me with this.”
He watched her face through her hands, watched the tears in the cracks of her fingers.
“It’s not fair,” Mark said, quietly. “Everybody just moves on, like it didn’t happen, like he didn’t matter.” He looked at a toy phone with bright blue buttons and happy eyes. “I feel like I’m stuck in that hospital room.”
“I haven’t moved on. I was in that room with you. You could talk to me instead of,” she scanned the pile of toys, wrapped and unwrapped, “pretending.”
There were words to say, but if he tried to say them, then everything else would come out too. Everything in him, the fire and smoke that burned his insides whenever he thought of losing his baby boy would pour forth and scorch the living room to ashes.
“I’m done,” she said, taking a tissue out of her purse to wipe her eyes. She stood up, slung the purse over her shoulder, stepped into her shoes, and marched back out the door. Mark could hear her tires spin, kicking up gravel as she charged out of the driveway.
Mark jostled the toy phone with his foot, and it played all kinds of sweet messages. “Bye-bye, I love you,” it sang to him.
“I love you, too,” he answered, wiping tears from his eye with his shirt sleeve. He picked up the phone, pushing the button and turning it over in his hands, listening to the soft feminine voice inside.
“He’ll really like this one,” he said to himself as he reached for the tape and wrapping paper.
Posted by Jeff Harrison at 1:54 PM