My mom still has some of my old stories and poems from elementary school, embarrassing lines with huge cursive loops scrawled on that sideways lined paper. I remember scratching on those sheets with the extra fat pencil with the triangular rubber sleeve that was supposed to make me hold it correctly, then entering my work into little literary contests and writing competitions between schools. She might even have some of the ribbons of varying levels from those days.

Once I graduated from those sheets and pads, I had an old electric typewriter in the house to work on. It was one of those heavy machines that could close up in a hard suitcase, and it made a lot of noise that I think is the reason why I still can't work in absolute silence today. I never did get good at proper typing technique, even more shocking since my mom taught typing, back when that was a thing, but I did get pretty fast with my own index method. At the time, I thought that was great, seeing sheet after sheet of my writing coming out of the roller with real-looking text flowing across the lines.

By the time I was finishing high school and beginning college, we had Microsoft Word, at least the primitive version of it from the early nineties. That blue screen with magic white text appearing and disappearing on it made me think I had reached writer's paradise. No more correction fluid, multiple saved versions, and handy plastic disk organizers to manage all of my work across different classes or projects. You could actually have a different disk for each class to keep your work organized. For those of you too young to remember, disks were portable digital storage devices that look like the save button, but larger. Kind of like a flash drive, but they could only hold less than two megabytes of information. If you don't know what flash drives or megabytes are, just Google it.

The newest trend I've seen in writing programs are either the stripped-down, minimalist ones that advertise themselves as "distraction free" or the feature-rich, super-technological apps that come with lots of helpful elements that either track progress or facilitate organization and planning. I've never understood the appeal of the "distraction-free" apps that are basically a blank screen with no formatting, no features at all, where the only thing you can do is type. It's paper. You've invented digital paper. As a writer, I need to have a thesaurus, dictionary, baby name book, encyclopedia, medical textbook, and legal counsel nearby at all times. In addition, I'm a planner, not a pantser, so I need some way of saving my thinking for each part of the plot - including character details, symbols, and even phrases I want to use.

To find the right tool for me, I looked at some free options online, and even tried Scrivener for a while. The problem with all of them was usually that they are either too complicated or just not intuitive enough. There were times when I felt as if going back to index cards taped to the wall would be easier.

It's a web-based novel writer and editor that includes a bunch of features to help writers complete projects. I used it all summer long on a new project, and it really increased my productivity. I'm still learning how to use it, and there are features that I haven't even tried yet, but I'd like to share my favorites so far.

The writing space is pretty minimalist, for those who are into that sort of thing. It's mostly clean space, divided into sections determined by your scene planning, which is another feature. However, it also has a feature that highlights grammatical errors and misspellings, and even suggests changes when you hover over the word or phrase. It even makes stylistic suggestions, picking up on wordiness or cliches and offering advice for improvement. 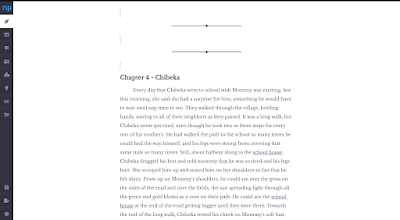 This is one of my favorite aspects of the program. Think about the index card method of plotting scenes, or the apps that imitate it, and then give it a brain. Not only does it allow you to plot out your novel scene by scene, change the order of those scenes, and attach notes or color codes to them, but it also tracks your writing stats and applies them to the scene "cards" as you go. For instance, not only does the row show you how many words are in the chapter, but each scene card shows how many words are in that scene. This is extremely helpful for pacing. Just being able to see that one scene is longer or shorter than another, or setting a word goal for a scene compared to the ones near it, improve my sense of how each scene flows into the next. You can jump to any scene in the manuscript from the card itself, and even start a revision of the scene that will still keep the old version, like tracking a markdown. 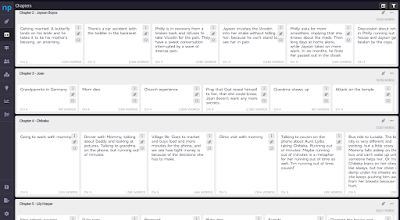 If you ever used the physical index card or sticky note system, you probably also made character cards with information about each character and how they relate to each other. This page does all of that, again with color codes and lots of other ways to save your thoughts, but adds a really special statistic. While the system tracks the words in each scene and reports that data in the scene card, it also tracks the scenes that each character is in, and reports a word count that approximates the "face time" that each character is getting in the manuscript. By adding the character name and any alternate names to the character card, it keeps tabs on how much that character appears. Ever have a minor character that just disappears from the planet after a crucial scene? This way you can catch that and decide how to bring them back to earth before your beta reader or editor can say, "Whatever happened to Chuck?" 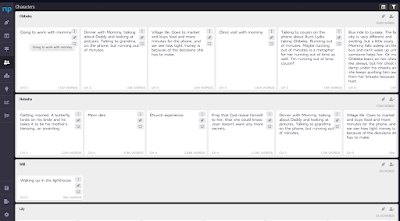 4) The Data OMG the Data

I have to admit, I'm very goal-driven and highly motivated by numbers and records, whether it's writing, teaching, exercise, or basically any other endeavor. There's something about the data that makes my efforts and accomplishments very tangible to me, and it's probably the major appeal of this program. Novelpad tracks your daily progress on the manuscript, delivering accurate reports on your daily word count, tracked either by overall words or daily increments, as well as minutes spent writing. For someone like me, setting a word goal in my head and flipping to the analytics tab to see how close I am to reaching it is inspiring. There were some days this summer when I got so lost in the writing that I doubled my projected word count without even realizing it, but there were others when I struggled to get to that magic number where I could let myself quit, checking the numbers every ten minutes like that annoying kid in the back seat on a road trip. Either way, being able to get all these numbers instantly - on scenes, characters, overall progress - has really ramped up my writing routine and made me more productive and efficient than ever. 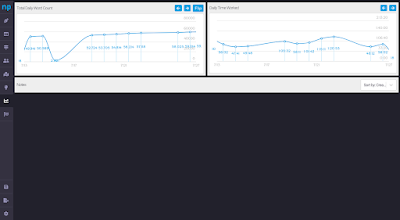 In addition to tracking the data, Novelpad also lets you set specific goals for yourself and monitor your progress towards them. On the goals tab, you can input your goal in terms of words or minutes, on a daily, weekly, monthly, or overall rate. Then the app spits out a calendar that tells you how much you have to write each day to reach that goal. You can even tell it which days of the week you write, and designate some days as higher productivity than others. I set it for max effort on weekdays, half on Saturdays, and no writing on Sundays, and it calculated how much I would have to write each day to reach my word count goal for the summer. Also, if you set it to adapt the schedule to progress, it will recalculate every day, based on the previous day's work. So, if you write more than the goal one day, the rest of the days on the calendar show fewer words required. 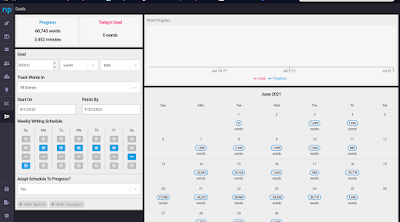 The one caveat I have about the program in with that one feature. When it works correctly, it's incredibly motivating, but there were a few days where the algorithm failed and its calculations were off. Specifically, I would come to the work session to find that the app thought I had no words, even thought the word count on the analytics tab was correct and the manuscript itself was still completely protected in the writer. In other words, the manuscript was fine and the overall word count was correct, but the goals page would say that I was thousands of words behind, and the calendar was way off. It would always correct itself by the next day, but for someone who is highly motivated by the data, it was annoying. Still, the Novelpad team was easy to get in tough with via their Facebook page, and talked me through a workaround I could use until they fix it in the next update.

Overall, I'm really pleased with the program, so much so that I'm reviewing it just for the satisfaction of hyping it up. It's got a lot more features that I'm still learning, and it gets tweaked a little with each update, so these are just highlights, but every time I learn something new about it, I fall in love with it a little more. Also, it's safe, backing up hourly to the cloud and allowing you to save or export to Word, Markup, or Epub files. A one year subscription costs only $60 after a two week trial, so it's really inexpensive, compared to similar apps that I've tried. If you are serious about writing, definitely check it out at their website, and comment here if you like the app.