What's in a Name?

Managing a blended family can feel like being in the blender yourself sometimes. There are so many difficulties and pitfalls that can make you wonder sometimes if it's ever going to just all come together (spoiler ahead - I'm pretty sure it never does). There are custody schedules and finances to organize. There are House A rules and House B rules and All The Time rules. On top of in-laws, there are ex-in-laws. At least I think that's the way to say it. What else would it be? Pre-laws? Outlaws, maybe?

Out of all the difficult issues and negotiations, one of the most challenging problems to tackle is one that I think most people don't initially think of - names. I mean, exactly what are we supposed to call each other? 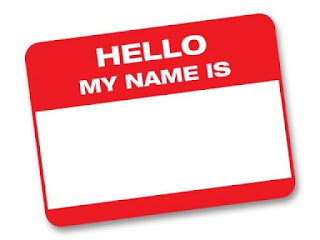 When I introduced my wife to my older kids, after a couple of months of dating, I made the mistake of presenting her to them on a first name basis. This was only the second time I had let them meet a woman I was dating in two years, and they never would have met the first woman if I had known what I was doing at the time or had any sense. So, I hadn't really thought through all of the protocols involved.

My kids have always been raised, sort of like I was, to call adults only Miss or Mister First Name, or Auntie or Uncle First Name, if we're close friends. But for some reason, this seemed too formal at first meeting, both for me and my (then) girlfriend. So at first they called her by her first name. Very soon, when it looked as if things were going to get serious between us, and probably quickly, we both started to realize that this name situation wasn't going to work long term. But what do you call your stepmother? What name or title defines that relationship in a respectful way, and doesn't trample the feelings of the biological mom?

"Mom" doesn't seem quite right. Although my wife would have welcomed it, she remembers what it was like to be a young woman who's mother had passed away and getting used to the idea of her father remarrying. It took some time for her to even get her head wrapped around the idea of having another female parental figure, and longer than that to start feeling comfortable calling her "Mom." And that was without the added difficulty of shared custody.

The first name we came up with was Mama Ty, since my wife's name is TyAnn, and Ty for short. Kind of casual, respectful, familial, but not official, right? That lasted for less than a week, just enough time for the kids to spend a weekend at their mom's house and tell her a funny story about something that "Mama Ty" said. I got a phone call from House B right away, and an emphatic explanation about why that name was neither appropriate nor welcome, along with a verbal cease and desist order. My wife was a little upset when I relayed the news to her, especially because the first-name-basis bothered her so much, and because we (mostly she) had put a lot of thought and emotion into coming up with that name. In a lot of ways, it's almost as difficult as naming a child, since it sticks with the family forever and is so intrinsically linked to a person's identity.

I was a little upset about going back to square one, but the more I thought about it, the more I agreed with my ex, even down to the emotional charge of the conversation. I understood where she was coming from. The name isn't "Mom," but it's a little too close for comfort. I get it, and I would feel the same way in that position. There are no circumstances under which I would want my children calling their stepfather "Dad." Not "Dad," not "Daddy," "Dadster," "Daddio." Unless he's a priest, and actually on the clock and wearing his collar, he doesn't get the title of father. That title goes to me, and I think I've earned it. So I was able to see where she was coming from.

So, like it or not, square one is exactly where we found ourselves. We couldn't go back to tradition, even though my wife was raised to respect adults pretty much the same way I was. Miss TyAnn seemed way too formal for such a close and familial relationship. Even though the relationship was far from close and only legally familial at the time, that was the goal, and it really felt as if such a formal title would stifle any growing bond between us all.

Likewise, Auntie TyAnn seemed not only a little too formal, but also just straight up weird. We had visions of the kind of looks we might get in public when people hear our children calling my wife Auntie, especially since we are also a mixed family (Mixed and Blended - get it?). "It doesn't look like he had kids with his sister, so, his brother's sister?" The prettiest explanation for me kissing "Auntie TyAnn" in public is that Uncle and Auntie are spending time with the niece and nephew, but then that falls apart when the kids call me "Dad." It's easy to say that everyone should mind their own business and stop trying to figure out anyone else's, but I know I listen in intently on every conversation going on around me in public and sometimes go home and write stories about them, and I don't think I'm the only one, so apparently perception matters.

After a lot of balled up papers, used up vetoes, and other types of name-calling, we finally landed on a name that everyone could live with. MyTy. It makes no sense at all, except that it's a fun and intimate derivation of my wife's name, one that is special for the kids, that only they can use. It's a name that, to us, conjures up a sense of closeness and fun and silliness, and it wasn't until later that we realized that it conjures up a sense of booze and ladies nights as well, but we're okay with that. This way, everybody has a unique and personal name that addresses their role in the blended family, with infringing on anyone else's role in the process. "Mom" is happy with it, "MyTy" is happy with it, and so are "Dad" and the "Bigs."

Of course, then the "Little" comes along. In the next episode of Mixed and Blended, I'll share the rest of the story, in which a very confused toddler grapples with understanding why she can't call Mommy "MyTy."
Posted by Jeff Harrison at 7:21 AM