Everybody I know is angry with Trump to some degree, and this latest tirade about Charlottesville has only made it worse. I hear a lot of frustration and even despair coming from all sorts of people, even those that I know voted for him. I get it. There's every feeling from fear to disappointment, all kinds of name calling, and many ideas about what to do. The reaction that bothers me, though, is when I hear friends, celebrities, or radio personalities saying things like "Trump is not my president." Just searching #notmypresident will find you all sorts of similar reactions. 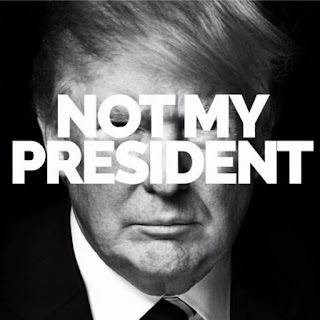 I get the feeling. Most of us want to disassociate ourselves with this president, or the government as a whole, or even with a party that we may have identified with previously. If you talk to people who travel out of the country regularly, most of them will report what foreigners think of us right now, because of our leadership, and it's not good. But whether you voted for him or not, whether you are just frustrated, embarrassed, or outright furious, we cannot let disassociation lead to disenfranchisement. This is our place in history, and in one hundred years, kids will still be learning about the forty-fifth president of the United States of America. For better or, realistically, for worse, this is your president.

Disenfranchisement is real, and many Americans have felt that they are not a part of the system for a long time, and for good reason. It's one thing to feel disenfranchised, but it's another thing to disenfranchise yourself. Removing yourself, your voice, from the system is not going to change it.

The president serves us, not the other way around, and when we say, "not my president," we say no to that concept. We say that he only serves other people, not us. And while it may be true that he is currently not serving your needs or addressing your concerns, that doesn't mean it's not still his job to do so. It just means that he's failing at it. You can say all you want that the president doesn't represent you, but if you ask anyone from outside our borders, you'll find that he does. If you mean that he does not reflect your values and attitudes, then you're probably right, unless you have a penchant for torches, swastikas, and vehicular homicide. But if you mean that he is not the face of this nation right now to the world, then you're dead wrong. Sure, people around the world are reasonable and understand that he doesn't speak for all of us. Still, they also know that he was chosen for office through the method that we have agreed upon to elect leadership, and that alone says something about the state of our country, however you look at it.

Saying "not my president" is like pulling the covers over your head and pretending the sun isn't out. It's like sticking your fingers in your ears and chanting nonsense to block out the things you don't want to hear. It doesn't remove you from the problem, only from the solution. And it's exactly what the nazis and white nationalists are saying too.

There are forces out there trying to rob you of your agency in this country, and ultimately in your own life. They are growing bolder every day - bold enough to march down city streets with uncovered faces, obviously fearing no consequences, chanting "you will not replace us." To you. They are saying that you don't belong here, that you have no say in this country, that you are a second-class citizen, if a citizen at all.

And you are chanting down that street with them.

Don't misunderstand, I'm not saying support the president no matter what. I'm not saying support him at all. Organize, shout, shake your fists, write your blogs, and do whatever is right and just to oppose wrong and injustice. But saying "not my president" is a cop-out. It's tucking your ball under your arm and walking off the court when the score gets too high. And we're not even past the first quarter yet.
Posted by Jeff Harrison at 5:39 AM