I've noticed that a lot of pastors and other evangelical pundits that pop up in my Twitter feed are very worried about the state of manliness these days. 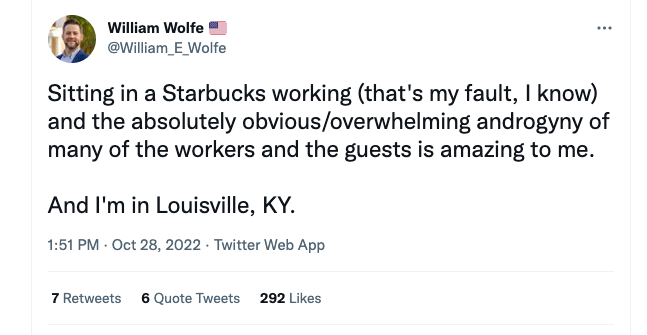 For them, the true and proper - Biblical - definition of manliness, includes boldness in speech and authority in home, work, and church. It definitely means getting married, preferably young. 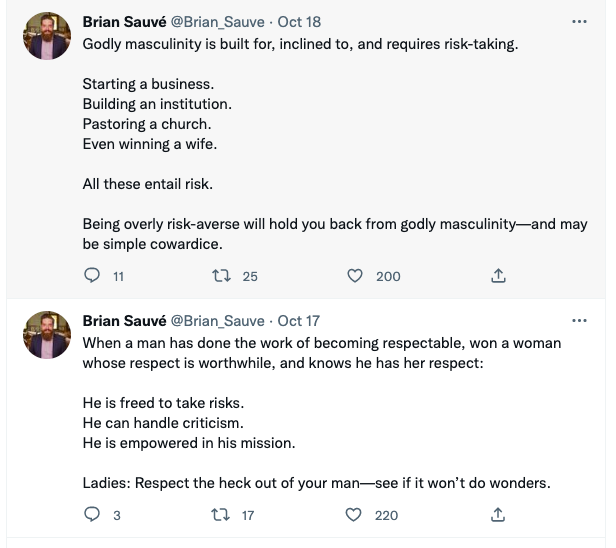 For many of them, manliness also includes looking the part - wearing the manliest of clothes and sporting a long, lush beard. 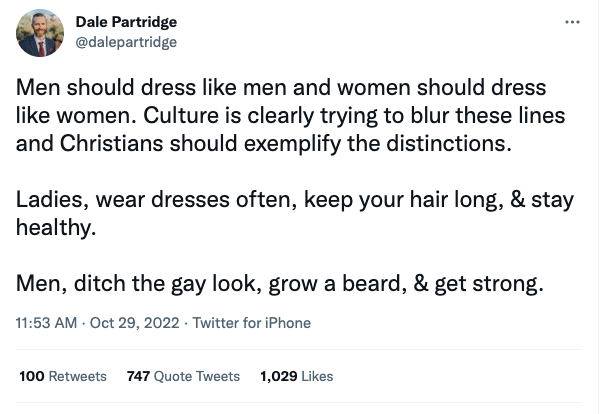 It's really been getting to me lately. Not for myself, of course. Goodness, no. But I have this friend I'm specifically worried about.
I've known this guy for years now, and he doesn't fit the description of manliness at all, not even a little. It's the kind of thing I never really noticed before, but now, with all the emphasis on this biblical manhood, it's like I can't unsee it. I always thought of him as different, for sure, but not necessarily in a bad way.
Let me explain what I mean. For starters, this guy is in his thirties and unmarried, which is not necessarily so bad. A lot of guys just have bad luck in this area, for various reasons, and to be honest, my friend is, shall we say, aesthetically challenged. What I mean is, he ain't exactly good-looking. And yet, the womenfolk seem to flock to him. I wish I had half the charisma this guy has when I was single. Women are just naturally drawn to him, but it's like he doesn't even notice. No flirting, no dating, no "courting." Nothing. As far as I can tell, he's never even had a girlfriend. He never talks about even liking some woman, much less getting married some day or having kids. I'm not sure he's even interested.

To be clear, he's also a self-appointed preacher, although he's never been approved or ordained by any church or denomination I know of. He was endorsed by another famous preacher that a lot of people have heard of, but I'd rather not name here. But this guy is similarly outside the norm when it comes to masculinity, as well as a bunch of other stuff - unmarried as well, on top of being anti-capitalist and just all around odd. He laid hands on my friend at the beginning of my friend's career as a preacher, and then promptly got himself cancelled for saying some pretty harsh stuff about our local political leadership.

Anyway, if it were just the unmarried thing, that wouldn't be so much, even though, as I said, he's surrounded by eligible, beautiful women. He's also overly affectionate with the guys. I mean, I suppose it's a part of his culture (he's not American), but he's the type to be kissing dudes on the cheek in greeting. If I'm being perfectly candid, it makes me a little uncomfortable. Also, he comes from one of those foot-washing traditions, and he tried to make us all do it the other night, like literally wash our feet. None of the other guys in the group have said anything about it, but I feel like they must notice, especially since there's one guy in our group that he's especially affectionate with. The two of them always sit together wherever we go, and even if you chalk up the kissing to cultural greeting standards, the two of them seem to always be leaning on each other or sitting with one's arm around the other, if you know what I'm saying. Close.

Then there's the way he carries himself. I've seen him get cussed at and not even say anything back. He'll get hit and just take it, not even defend himself, at all.

And on that note, I have to confess something that might make me look bad to some people, but I think it's important to note concerning his lack of manliness, specifically when it comes to sticking up for himself. So, among our group of guys, we have this sort of informal organization, a kind of club we put together to travel and spread the gospel. The club funds are supposed to be for travel expenses, advertising materials, messaging, event coordination, and sometimes charitable giving. Now, I'm in charge of the money we collect, from each other as well as donations, sort of the club treasurer. It's a volunteer position, completely unpaid, but it's also a lot of work. So, occasionally, I use some of the club funds for my personal expenses. Not much, and only because with all the time I spend on club business and the way the economy is lately, I'm really struggling. The thing is, I'm pretty sure my friend knows about this, and he hasn't said anything. He just won't confront me about it, which makes me think either he's too weak to speak up, or he doesn't care. In addition, some of the local pastors are concerned about him as well, and have been talking to me about getting my help to get him to quit preaching, maybe even expose some the stuff I'm talking about to get people to stop listening to him. Now, I know for sure he knows about these pastors and I talking about him, because he low-key brought it up the last time we all had dinner together. He just threw out there that he knew someone in the group was thinking about betraying him, and even though he didn't call me out by name, he looked at me later on and said basically, "do what you have to do." I don't want to be a bad friend, but these pastors are offering some real money for my help, and I'm thinking about taking it. And I'm pretty sure he knows all this, but he's too effeminate to do anything about it.

I wonder what some of these "theobro" pastors and Christian pundits would think of my friend - an unmarried man with no interest in women or romance, who refuses to stick up for himself, wouldn't crush a grape in a fruit fight, is overly affectionate with the guys, and doesn't even work out. A guy who openly preaches that Christians should be meek and put themselves last.

On the other hand, his his beard game is pretty fierce.

Posted by Jeff Harrison at 8:35 AM