I took this last Christmas break as an opportunity to get the camping gear out again and try to take a longer trip with my youngest daughter, who had just turned four. Everybody else was invited, of course, but the only other person who showed any interest was my now-apparently-grown son, and he had to work. After the first one-night encounter with the great outdoors went so well, despite some minor glitches, I decided to extend the trip to three whole days, to really get the experience.

It looks like I have a real camper on my hands. Not only did my little girl enjoy every minute of the trip, but she keeps asking when we can go back. Normally I only go when the weather is pretty cool, which is a very narrow window down here in South Florida, but she's got me thinking about building one of those makeshift air coolers to keep the tent cool enough to sleep in. I can deal with the warm weather throughout the day - I expect the outdoors to be a little swampy down here, but I just can't sleep and sweat at the same time. I'm not exactly handy, but I think I can follow a YouTube instructional video well enough to put one of these together and add some more camping dates to the calendar.


Since there were some poorly executed aspects of the last trip, some of which were probably my fault, I tried to use all of my planning skills to make sure this one went smoothly, and just about everything did. The only two major failures were the fire (again) and the pillows (AGAIN).

I made sure to get everything I could possibly need to build a proper campfire this time, but for some reason, the fire spirits tormented me. I could get the kindling lit, and even a small fire going for a minute or so, but those log just would not light. And the thing is, I remember being so good at this when I was a kid. I was the go-to guy for campfires, so much so that I turned into a little bit of a firebug for a minute. Now, I can't seem to get anything to burn for longer than a couple of minutes. Thankfully, I was wise enough to bring the propane stove as a backup this time, so we could eat proper meals. On the other hand, I probably should have realized that it needed assembly before we left. It was still in the box, after all. I ended up putting it together while the sun was setting, and finishing it by the light of my cellphone. It wasn't until breakfast the next day that I realized that virtually every single nut and bolt was in the wrong place, but it still cooked quite a fine hot dog, so I'm still calling that a success.

The other mishap was the lack of pillows, which, given my obsession with pillows, can only be ascribed to some kind of psychological weakness, some Freudian trauma that probably needs exploring. Still, we made it through the first night, and my forgetfulness caused us to have to take a trip into town to Walmart to get four of the fluffiest pillows that can be bought at such an upscale establishment. 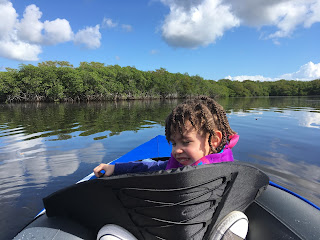 Also, we got the canoe out on the water together for the first time, paddling through the Loxahatchee River with all of its mangroves and wildlife. It really turned the trip into an adventure. I was worried at first about being out there on the water with a four-year-old, but we took all of the necessary precautions. All, that is, except for attaching the keel to the bottom of the inflatable canoe. While this didn't distract from the view or the fun of the ride, it did make it a lot harder to direct the canoe and keep it moving in a straight line, much more than I expected it would. There has to be some kind of life lesson there, but it escapes me right now. After about an hour on the river, my arms and back muscles were burning, and the baby was sleeping in the front of the boat. Still, definitely would recommend.

As much as I hate not having the right number of pillows, or any pillows, or proper air conditioning, or refrigeration, or walls and privacy, I think that the best thing about these trip is not having stuff. Not having television, except for a movie to watch together after dark in our sleeping bags. Not having video games or other distractions between us. The reason she keeps asking to go camping is because it's just the two of us and non-stop forced interaction. We prepare our meals and eat them together, we talk through the woods or ride horses together, we take the canoe out together, and we even go to sleep together. There's a visitor's center near the campgrounds, and we can spend a couple of hours in the blessed air conditioned museum, coloring and looking at the exhibits together. It can get exhausting for me, and I definitely need some alone time when we get back, but while we're there, it's really just a good time. Not annoying or tedious or boring, just fun. And special.
Posted by Jeff Harrison at 7:15 AM