As hard as I work and staying fit and healthy, and as much as I try to think young, I am becoming aware that time is catching up with me. In short, I am getting old. Getting gray hairs never bothered me, especially because that started happening so young. I eventually solved that problem with a shiny new electric clipper. I'm even comfortable enough with it to grow out the beard, which my wife had been begging me to do for some time, despite the fact that it's almost completely white. When I first really looked at it, I felt like it did make me look older, but now I guess you could say it's growing on me.

I sometimes catch my self giving kids speeches about things "in my day," when gas cost a dollar a gallon and hip-hop could barely get radio play even on urban stations. Still, that's not what has been making me feel old.

I get plenty of exercise every day, probably more than I deserve, and until recently I had felt indestructible. I've had scrapes and bruises, pretty requested as a matter of fact, but never any broken bones, and certainly never any of the "old man" injuries - the trick knee, the loose ankle, the stiff back. Then, a little over a year ago, I must have overworked my shoulder muscles, because I noticed a sharp pain afterwards, always associated with certain positions and exercises, and instead of getting better, it got progressively worse, even after a long period of resting it. Realizing that I was favoring it throughout basketball games and wincing whenever I pulled off a compression shirt made me feel like one of those guys I always made fun of (just in my head, though) for trying to extend their youth and run with the young fellas.

The specialist, once I finally went to see him, said there didn't seem to be any tears or permanent damage, just some inflammation. Apparently, I have a weird collarbone that ends in a curve, and digs into the tendon as my muscles grow. So, all the work I've been putting into building muscle in my shoulders has aggravated the issue. He recommended taking some Aleve every day for a while, and doing some strengthening exercises to kind of retrain the muscle to fit into the space better. That helped, but didn't solve the problem. The problem was, he also said that I have to change my sleep habits as well. At the time, I was peacefully sleeping on my side, with that am fully extended upwards, and spending anywhere from five to seven hours in that position was tearing the tendon and adding to the pain. It took a couple of months to find a new sleep position that didn't cost me the function of my left arm, but since then, I feel completely back to normal.

Except for my back. Getting up from a bent or prone position takes approximately 50% longer than it used to, and I'm not entirely sure when this happened. It just seems as if one day I suddenly noticed that I was having to stop midway through straightening up to complete the task. And my ankle clicks when I rotate it. Oh, also, my left elbow gets stuck sometimes and I have to throw it out. 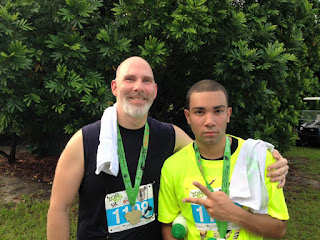 Even so, I'm embracing getting older. Every time I race, and see these sixty, seventy, and even eighty year old guys running a 5k or a sprint triathlon, I see life goals. I want to be exactly like those older men, not just "staying active" by walking the mall every Monday, but really pushing the limits of what their old bodies can do. I watch a video of Ric Flair deadlifting 400 pounds, almost twice as much as I'm lifting, and I get motivated. I really do feel like I'm fitter than I have ever been in my life, but I don't want to have the mindset that allows for deterioration. I want to get stronger as I age, not weaker. I may be fighting nature on that issue, and she may win, but at least she's going to remember my name when the fight's over.
Posted by Sleep Deprived Newlywed Father at 7:15 AM