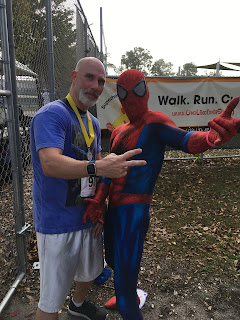 For February's race, I got the chance to run with a bunch of other superheroes for a great organization, Live Like Bella, to raise money and awareness for pediatric cancer.  The foundation and its events are named after Bella, a little girl who loved superheroes and fought like one against cancer, so wherever they hold these 5k events, everyone dresses like superheroes. This time, it was just me, the wife, and the little one, but our little girl was definitely feeling all sorts of combinations of emotions at seeing all of the runners dressed up, some of them in costume that looked like some of the best cosplay I've seen, from a Lady Deadpool in full mask and costume to Captain America running the entire race with his shield. I beat both of them, for the record. Personally, I can't even understand how some of them could even run in those getups. I just wore an X-Men tee and shorts, and I was working hard enough. There was even a guy who didn't run, wearing the absolute best Spider-Man costume I've ever seen on a human being outside of the movies. Actually, it was a little less realistic than the recent movie costumes, but a little more impressive than both the Electric Company Spider-Man and the Japanese Spider-Man put together. Add to that the fact that the guy had the perfect body type for the part and you get the picture.

On top of being a fun event, it was held at my favorite place to run, ZooMiami. There's something really spectacular and exciting about running through that zoo - maybe the nice, evenly paved route or just seeing all the animals as I make my way around it. Racing past that rhinoceros and tapir is about the closest I get to tapping into the primitive hunter in my DNA. At least, it was thrilling for me. The rhino seemed nonplussed about it.

The other great thing about running these races at the zoo is that we always stay the day and see the zoo. We've had annual passes to ZooMiami, which I highly recommend, for years now, so we go often enough that our youngest knows the actual names of most of the animals. To be clear, I don't mean that she knows their animal names, like "rhinoceros," but that she knows their Christian names, like "Suru," and thinks that she has some kind of responsibility to feed them. March's race is another 5k at the zoo again, this time to raise money for the zoo itself, and one thing I learned from this one is that I'm definitely going to slip out to the LA Fitness down the street and take a quick shower before starting the zoo tour, because walking those paths with the sweat of a hard-run three miles on you is even less pleasant than it sounds. Also, wiping down in the bathroom and changing into fresh clothes makes it worse somehow, not better. Let's just say there were several times when I noticed people looking around with their noses sniffling, and I just pointed at the monkeys or the elephants and sniffled with them.

As for my performance, I definitely prepared a lot better for this one. Also, it helped that I wasn't sick the week or so before the race like January. I managed to cut over a minute off of my time, down to 23'12", and even felt really good after the race, which made me feel as if I could have pushed even harder and come in under 23 minutes. Then again, if I had done that, I might not have had the energy left to do the zoo. And the Knaus Berry Farms strawberry picking after that. And Home Depot after that. And grocery shopping after that. All in all, it turned out to be a very long and busy day, but I didn't really feel like I could complain, since I was so grateful to my wife for getting up early on a Saturday to cheer me on. At least, I didn't feel like I could complain until about 6 PM, at which time I started to complain a little bit.

Still, it was a great day. One more successful race completed and ten more to go. I'm learning all sorts of tricks to improve my performance, and also compensate for getting older. I'm drinking a half of a bottle of Pedialyte the night before the race and finishing the bottle on waking that morning. I'm tweaking my pre-race meals to maximize my energy and minimize my desire to vomit halfway through the race. I'm getting more intentional and effective in my training, switching up my workouts two weeks before the race, which is having the added benefit of confusing my body into slimming down and metabolizing better. It used to be that my body was confusing for so many other reasons, like the incredible number of donuts and sodas that could fit in my gullet, often at the same time, or the amazing ways that I would fit my fat gut into my pants. I swear I had at least a couple of pairs that had to be like the Tardis - much bigger on the inside. Overall, I'm finding out that the best thing I'm getting out of this challenge is not just the effects on my body, but the firmness of mind and all of the things I'm learning about what my body can do and what I should be doing to it.

However, it still bothers me that a 49-year-old guy, the winner in my age category, came in almost four minutes faster than me. I didn't even see him on the course, so all I know about him is his name and age from the race results. Still, instead of getting upset about being behind, I've got something to work for, and just six years to work on it.
Posted by Jeff Harrison at 7:28 AM

Jeff Harrison
Jeff Harrison is a writer and High School English teacher in Ft. Lauderdale, and a soon-to-be-published novelist. He has a wonderful and supportive wife, four children ranging in age from 2 to 24, and a 3-year-old grand-daughter and new grandson. He doesn't write as much as he wants to or read as much as he should, but he's working on it. Generally, he blames this on the kids, but they all know the truth, even the babies.