There's always a lot of confusion for the littlest children in blended families, starting with what to call everybody you live with, to knowing who is related to you and who isn't, to figuring out everybody's schedules. This last one is one that causes not only confusion, but a whole lot of tears and disruption around our house. 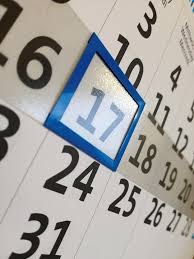 By the time our youngest was two, she was very verbal, almost too much, and very attached and bonded to her big brother and sister. She would wake up every morning at least a half hour before anyone else wanted to be up, and that without even an alarm clock. It was as if something in her just just knew when would be the worst time to jump in somebody's bed and woke her up with just the right amount of energy for the job. Of course, God bless her, she had no concept of days of the week - still doesn't, really - so weekday and weekend mornings were just the same - still are, really. So she could never figure out when her brother and sister were going to be home, and when they weren't. She would check on them just to make sure they were home, and was always surprised, and a little sad, when they weren't.

Night time was even worse. She likes to say good night to everyone before she goes to bed, kisses and hugs and all that, and sometimes, even now, she'll forget that her siblings aren't home. It's less of a stressor now, but when she was two and three, she would cry for her brother and sister, wailing their names because she missed them so much. I guess it was partly the shock of not finding them home, plus not being able to really understand when they would ever be back, or where they were in the first place.

It reminded me of when her big sister would cry for her mom at night. Putting her to bed was always an emotional routine back in those days. There really isn't any logic or magic that can cure it, just touch and time. Just remembering those nights helps me empathize with the baby more, instead of thinking she should suck it up for a night or two.

Fortunately, now that she's four, she doesn't cry at bedtime when her siblings are gone as much, but it still happens. There was one moment just this past week, when she was watching a show that she usually watches with her sister, and that started her crying for her. At first, it was every night when her siblings were at their mom's house, and bad enough that it would break your heart for her to hear it. We tried asking her if she wanted to call them, or even Facetime with them before bed, but she would always refused. We tried it a couple of times, and it sort of calmed her down, but not much. She really didn't want to be on the phone with them or even see them through a screen. She wanted to touch them, to know that they were sleeping down the hall from her, or just on the other side of her closet.

Explaining that they were at their mom's house didn't help much, because the concept was lost on her. If Mommy is here, then this is Mommy's house. So whose house are they at? After she actually met their mom, it made a little more sense, but then again, it probably mixed some other things up as well.

What does your daughter call her half-brother and half-sister's mom?

Right now we're at peace with "Brother's Mom" or "Sister's Mom," because just saying it like that helps her keep it straight in her head. She's not around their mom enough for it to be awkward, and it's not really different from what she calls her friends' and classmate's moms and dads. For that matter, she calls me "Mommy" or "Teacher" half the time anyway, so who cares.

Then there was the time that both families got together for dinner after my son's high school graduation. Not only was it both sets of parents and step-parents, but grandparents, remarried grandparents, aunties and uncles, and cousins. Add to that some non-related friends who bear the title of "Auntie" and it gets even more confusing. Our little girl mostly sat at the table quietly next to her mom and looked at everyone. After a while of watching everyone getting along, she started quietly playing with the two boys next to her, both a little older. Afterwards, she asked who those boys are, and I'm still not sure how to explain to her that one of them is her sister and brother's cousin, but not hers, and the other one is not related to anyone at the table at all, not adopted, not officially fostered, but generously being raised by members of the family for a while.

In fact, I'm not much of a help, really. Since I'm still stuck in the loop of respect names, I still call half the women at the table Auntie myself. I wonder what the baby thinks of that. One day, maybe soon, her teacher is going to ask her to draw her family tree, and she's going to make a hedge bush about a mile wide.

But as confusing as it must be for her, and, frankly, for me sometimes too, at least it's not angry or tense. Awkward sometimes, yes, like when my ex-wife's mom stops by to pick up the big kids and the baby runs down the driveway to get a hug and a kiss, and sometimes even a gift or two. Or when their grandmother is so friendly and so innocent about all this, she offers to babysit from time to time.

That's awkward, and probably confusing for the baby. But the thing is, it comes from a place of genuine love, and it makes me smile whenever it happens. Maybe there will always be some awkwardness in families like this, and lots of confusion in uncharted waters, but at least there's no fighting. I'd rather see my little girl confused and tripping over what to call everyone, than afraid of her brother and sister's relatives or watching us behave like angry fools.
Posted by Jeff Harrison at 7:11 AM