I've noticed a trend with many of my low-performing students. Every time there's any kind of delay or setback or any kind of hitch in our work - the internet goes down for a minute, the screen won't connect, the document doesn't load, whatever - several of them give the same reaction. "Well, I guess we can't do the [test, quiz, classwork, essay, etc.]." Variations on the theme are often "Looks like we all get 100's," or "Free day!" It aggravates me so much more than whatever glitch is holding up the progress in the first place.

How can I tell these kids, in love and respect, that this is the attitude of losers?

It's always the low-performing students, too. I'm not saying that the high achieving students are crying over the possibility of less work, but they are suggesting ways to fix the screen, or reconnect the system. In short, they are solution oriented. The big difference between these types of students is that the high-achieving kids embrace challenges; they understand that struggle produces growth and that nothing comes easy. On the other hand, the low-performing students expect everything to be easy, avoid work in every situation, and are never happier than when they can quit the struggle for knowledge and go back to playing Flappy Street or Crossy Car or whatever time wasting game they have circumvented the school's system to download on their iPads.

It's not lost on me that the only thing these students put much effort into is the very meaningless tasks that distract them from improving themselves.

Because I see it so often, I'm trying to come up with a way of reacting to it that doesn't come across and soul-crushingly harsh, but the only rebuttals that come to mind are the types that would probably get me into trouble with parents and administration, even if they definitely need to be said. I want to tell them that this is the same attitude held by many people living under bridges who have given up on challenge after challenge, until just getting enough food for the day became a challenge that they couldn't give up on. It's an attitude held by many people taking up space in their parents' houses after the age of thirty, dividing their time between Crossy Bird and binge watching Netflix shows on their parents' accounts. It's an attitude adopted by husbands and wives who walk out on marriages, or even children, at the first indication that a relationship requires at least some kind of effort. I want to tell them all this, and that there is still time for them to change their attitude.

And it's worse when there's more than one loser in the room, when all it takes is one person to give voice to that failure-tinged sentiment, and another three or four start piling on. Others laugh, and while my main focus is restoring the momentum in the class, I'm not sure whether the laughers are agreeing, or whether they are seeing the same visions of the future in their heads that I see in mine. I'm seriously considering faking one of these glitches in the first week of school every year, just to be able to identify who the quitters are and be able to nip that in the bud. I'm also considering having an alternate assignment ready for times when the technology fails or the lesson plan falls apart - something so academically powerful but also extremely difficult that the quitters would start brainstorming ways to return to the status quo just as much as the achievers do. 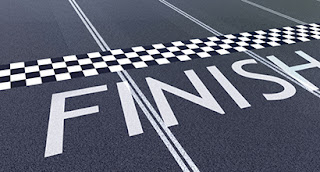 Unfortunately, the worst thing about this issue is that one of those losers lives in my brain too. He says things like that to me when life gets tough. I hear him on the second lap of the run at the end of a triathlon, saying that nobody would really know if I just walked these next few yards. I mean, you're already a winner; everybody gets a medal. He whispers comforting words to me when it starts raining just before I get set to go to the park to do by boot camp, saying that this is God's will for my life in this moment. He reminds me of all the rejections of the past whenever I start tapping words into this white box. I mean, really, what's the point.

Lucky for me, there's another guy in my brain, a bully who says all the things I want to say to the quitters in my class. He calls me names that I can't repeat here, and uses the kind of harsh and direct language that I can't use with impressionable young people. Sometimes I'm a little afraid of that guy, because he pushes me into doing things that I'm not quite sure I can do. Sometimes he bullies me into doing things that can get me hurt, either physically or emotionally. Sometimes he gets me into situations that have the potential for intense and enduring embarrassment. At the same time, that guy has pushed me into a lot of success. He has bullied me into walking across a room to talk to somebody I never would have met otherwise. He's taught me that I can find reserves of strength and power to get through that last lap, that we rest after the race, not during. He's shown me that if I run faster, I get to the end faster, and rest sooner.

His voice sounds a lot like the football coach from my junior varsity team. That guy was a man of great Christian faith and character who also cursed us out on that football field and called us names every time we failed to show maximum effort. If those same words had come from any other teacher, any other coach or principal, we would have been angry. We would have told our parents, and there would have been serious discussions. From him, though, somehow there was so much love in those profanities that we not only accepted it - we thrived on it. His words made us angry, for sure, but angry with ourselves for not pushing harder.

More than that, I wish I could get that guy to live in my students' heads like he lives in mine, because that voice has gotten me through a times a lot tougher than homework or technology or triathlons. When I consider what my life would be like, what my children's lives would be like, if I had become the kind of person who backs down from challenges, I thank God for that bully in my head.
Posted by Jeff Harrison at 6:34 AM