No Such Thing as 6T

There's a weird thing that happens when your daughter hits the age and size when she no longer fits into the "T's" line of clothing. My four-year-old is a tall, slim, long-legged girl whose feet have been getting farther and farther away from the bottoms of her 5T jeans for some time now. Since we're doing the obligatory family summer vacation soon, I couldn't stand to look at some of those jeans any more, much less pack them for a trip. So, being off work for the rest of the summer, I decided to take her to Old Navy for a new wardrobe. To say that it was enlightening would be a euphemism.

I went in looking for the next size up from 5T, since that's what she's growing out of. That's always worked so far, with clothes and shoes. Just get the next size up. I had to ask one of the girls folding clothes to help me find the right size, only to have her kindly guide me to the big girls section of the store. I'm talking regular girls sizes - no T's. And really, I had to know that this was coming. I don't remember this happening with my big daughter, but it must have, right? I also had to know that the T's were going to run out at some point. If the T stands for toddler, then it's not like they're going to have an 8T or 39T.

So once I got over the shock of the sizes, then comes the styles. One reason I like shopping at Old Navy, for the girls, is that they have so far resisted the trend of super-sexy clothes for young girls. Too many other stores make it impossible for me to buy something for my little girls to wear that I would actually let them wear outside of the house. Everything is low-rise or midriff, when I'm only trying to make sure that everything my daughter wears is touching something else she's wearing. If it's not that, then it's inappropriate pictures or text on shirts and other articles of clothing. These are the kinds of sayings that would be powerful and sexy on my wife, but are super creepy on a onesie or 3T shirt. And even though Old Navy is definitely my hero when it comes to keeping these styles away, the styles they do have in the sizes I need are more ... grown up. Not inappropriate, just mature. Sparkly skinny jeans and rompers like the ones my wife wears. Patterns instead of pictures. Ballerina jeans.

And what are ballerina jeans, really? As far as I can tell, they're really skinny jeans that are for girls who are exactly as narrow at their ankles as they are at their waist. Whatever they are, they fit my four-year-old perfectly, so thank God for them.

The other thing that took some getting used to is trying on clothes. Until now, shopping for clothes for my little daughter never involved a dressing room. You pick a pair of jeans that look durable and stylish enough, you hold them up to her waist to check the length, and then you ring them up and get out. As soon as I held up these size 5 girls' jeans to her legs and realized that they looked too big, even though the next size down was the T's, I knew I had a problem. We ended up trying on about fifteen different jeans and shorts. Some of them were too long, some had enough room in the waist for her and her best friend to both get in them, and some were perfect, in a way that made me relieved to actually find something, but a little weirded out that she was wearing big girl clothes.

Also, trying on clothes with a fully potty trained little girl, wearing panties instead of pull-ups, is a new experience too. I can't even express the strangeness of having to take her clothes off over and over in that tiny closet of a dressing room. It didn't help that whenever we had to take off a pair of jeans, she kept shouting, "get back here panties, you're not coming off." 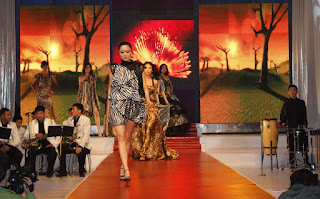 By the time we finished shopping, we had about ten outfits, including some summer dresses. Some things she picked out, and some I did. We rang up as quickly as possible, using my Old Navy card to get the discounts, because I'm gangster, and then got out of there, went home and took naps. Actually, she took a nap; I laid in my bed contemplating my life for about an hour.

After nap time we started organizing a fashion show for the rest of the family. I made a playlist of the most bubbly electronic music on my iPhone, connected to the bluetooth speaker, and set up the dining chairs for the audience. We used my yoga mat for a stage at the end of the hall, and her room was the backstage changing area. Fortunately, my little/big girl has taken a few modeling classes, so she's got moves on the runway. Unfortunately, this meant a whole lot more changing clothes, and faster, including shoes. Still, she got to show off all her new looks, especially the ones she picked out, and be the center of attention that she always wants to be anyway. The show ended with her taking about twenty-three bows to "Everything Is Awesome" and blowing kisses at her mom, sister, and grandparents, clothes and store tags strewn around her room, and me ready for another nap/meditation.

The good news is that, if history repeats itself, there's going to come a day, just like it did with my oldest daughter, that she won't need me to help her try on clothes. Some day she won't even want me to come shopping with her in the first place, and I can resume my role of staying home and telling her which clothes she has to take back to the store.
Posted by Jeff Harrison at 6:24 AM