Someday, Maybe is a novel about grief. Eve loses her husband to suicide and struggles to overcome the depression and trauma of not only the loss of her beloved, but also the shock of his decision and the guilt she feels for not seeing the signs. He leaves no note, gives no warning, and creates a mess of family affairs and other loose ends. In addition, his mother pours out all her anger onto Eve, sinking to horrific, but believable, depths of verbal and legal cruelty at a time when Eve is least equipped to defend herself.

As she grieves, we see flashbacks to Quentin and Eve's love and life together. As the novel progresses, those flashbacks become increasingly more honest. Eve begins to lose the gloss that distorted her view of Quentin, and begins to accept that he was not perfect, just as she isn't, but that both are still worth loving. One thing I like about the novel is that it centers an interracial marriage, with all of the nuances that brings, but the main conflict is not "them against the world." I appreciated the way it balanced the effort to normalize their union while still acknowledging the distinct issues it faces. At its core, the main conflict is grief, and the fact that the lovers are of different races is handled with honesty while still allowing Eve and Quentin to deal with the sorts of problems that most couples face. Even the animosity from Aspen, Quentin's mother, tinged as it might be with racism, is ultimately about control. I got the impression that while Aspen sees Eve as particularly unacceptable fas a daughter-in-law as a Black and Nigerian woman, nobody would have been acceptable. Her relationship with Quentin is one of those toxic relationships in which the mother tries to use her son as a surrogate partner after the death of his father, a dynamic also born out of unresolved grief.

However, despite some of the critiques of the novel I've read, which I'll discuss later, the novel is not so heavy as to become torturous reading. Not only does the novel oscillate between the utter despair, shock, and grief that Eve is enduring and the mostly happy flashbacks of her life with her husband, but the tone of the novel itself has a dark, sardonic, self-deprecating humor that makes the sadness of it more palatable. One thing that Nwabineli does very well is keep the tone dialed mostly to dark humor, but then periodically remind us of the horror of what actually happened. When Eve is sorting out her feelings for her mother-in-law, balancing a merciful pity for the woman's grief against a justified indignation against her cruelty, she remarks, "She wasn't the one who slid in his blood." Every so often, Nwabineli throws a punch that lands flush, disrupting the dark humor with the pain of reality. And immediately after the punch lands, she can retreat into a rose-tinted flashback or another self-deprecating quip that resets the mood of the novel.

In addition to the tone, there is a sense of hope produced by Nwabineli's choice of perspective and her strong sense of voice. By writing this novel in first person, Nwabineli is effectively reminding the reader of one of the oldest truths of fiction. If the main character tells the story, then she must survive in the end. In any first person narrative, no matter how many gunshots or breathless close calls, no matter how bleak or dangerous things get, the reader knows that the main character will live to tell the story. In Someday, Maybe, the person telling the story is the Eve who has survived, in whatever form that takes. The narrator is the Eve who no longer spends each day in bed, roused only by loving family members. The Eve telling the story no longer flinches at every hurdle or setback life throws at her. She has overcome, or at least is in the continuing process of overcoming, and this is probably the reason the novel takes the darkly humorous tone that it has. The Eve telling the story can afford to shake her head at the former Eve who easily falls apart at the slightest test of her resolve. In the future, she has the energy and strength to spare. She has survived the worst, and tells the story from the mountain top, or at least high on its face, even if the story itself takes place in the valley.

This brings me to some of the critiques I've read about Eve's grief process. In choosing the novel, I read some reviews, and found several that put me off the book a little, even though I still wanted to read it. Several of the reviews I found took issue with Eve "wallowing" in her grief. They found her either unlikable or unbelievable because she pushes away the people who try to help her and engages in behaviors that are either unhelpful or downright self-destructive to her healing process. I hate to give these reviews oxygen by linking to them, but I do want to respond to their criticism, so I'm posting screenshots here. 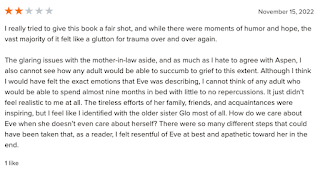 As a rebuttal, first I'd like to congratulate anyone who's lived the type of charmed life that has so far avoided the kind of loss that causes a person to grieve this way. Even so, to have the attitude that "enough is enough" seems pretty callous.
Secondly, dear reader, can I just mention in response to the above reviews that the entire novel takes place in about eight months? Eight months. Ocho meses. Huit. I mention this because when I first read these reviews, I would have liked to know that bit of information. From the time Eve discovers the dead, bloody body of her husband to the end of the novel is a mere eight moons, and yet for some readers, that should be plenty of time to "get past that." For those of us burdened with human hearts and psyches, it can take years to come to terms with the loss of a loved one, especially a spouse, and especially with the suddenness and unanswered questions of an unforeseen suicide. Before I read the novel, reviews like this made me almost not read it, although I would have missed out on something beautiful. Now, after reading the novel, they make me a little angry.
People grieve, often for a long time, and this grief can be a burden or even a cause for repulsion to others, to those who are not grieving. Some time ago, I lost a child. I don't talk about it with anyone except my wife, and that probably less than I should. He was basically stillborn after a complicated pregnancy. I became depressed and angry for at least a couple of years, and I was probably difficult to be around. Today, I'm more or less healed, in the sense that I don't eat everything that isn't nailed down and lay around all the time. Still, I have about ten or fifteen minutes of intense sadness, every day, and I don't always know when it's going to hit. He'd be turning twenty-four soon if he'd survived. I don't think it's a fair critique to say that a woman should get over the loss of her husband to suicide in just eight months.
This doesn't mean that Someday, Maybe isn't a tough read sometimes, emotionally. Grief is tough, and this novel does a brilliant job of depicting the process - including the messiness and self-destructive behavior. As she works through her shock and depression, Eve really does become a burden to her family, who rally around her to the point of risking their own mental health. She pushes people away and fails to confront issues until they snowball into problems. Fortunately for her, she does have a family with strong bonds and strong faith to support her through her struggle. I don't know how anyone would survive a loss like hers without that support. I suppose some people don't.
In the end, Eve has to reckon with the fact that while she isn't responsible for Q's decision, that her husband both was and wasn't the man she believed him to be. She discovers that it's okay to love him for all the things she knew and the things she didn't, and it's okay to move on. "Sadness is not a reason to stop living."
I found Someday, Maybe not only engaging and beautiful, but very helpful and encouraging. Nwabineli has created something with style and heart, and I look forward to reading whatever she does next.

Posted by Jeff Harrison at 5:14 AM