I've been reading Onyi Nwabileni's debut novel Someday, Maybe and it's really great. I'll do a review of it as soon as I finish it. One thing that I love about it is that it centers an interracial couple in a way that portrays some of the unique issues and advantages these unions face, but without making it the central theme of the novel. Nwabileni depicts in-law issues and cultural learning curves, but doesn't elevate those problems to a sob story about the couple overcoming racism or prejudice. On the other hand, sobbing does play a major role in the story, in the context of grief, but more on that later.

I felt a similar reaction to the central couple in the new Disney movie Strange World, which is ... not great ... for a lot of reasons. Not terrible, just underwhelming. One redeeming aspect of it is, again, the interracial couple at the core of the film, but in this case, the movie makes no reference at all to any hardships or issues stemming from their cultural and ethnic differences. In fact, aside from their complexion, I can't see any cultural differences at all, or any culture, really, which is one of the failures of the movie. While it's refreshing to see a multiracial family on screen that's allowed to just exist, experience has made me aware that while pockets of life are like that, interracial couples have their own problems.

In a Twitter discussion about interracial couples, Kyle J. Howard posted a definition that captures one of the main issues facing us:

That's it. That's an interracial marriage. And they can be healthy or toxic, loving or hateful, progressive or extremely racist. I remember during Trump's 2015 campaign and then presidency, one of the defenses his supporters would use against charges of racism against him were that "he'd be the only racist who ever dated a Black woman." As a rebuttal, consider the following:

1) No, he's not. Not even close.
2) That dynamic is a lot more common than people think.
3) There are various reasons why a racist white person would be sexually attracted to a Black person, all of them problematic and pretty icky.

Not being racist, I'd have a hard time listing all the reasons for a relationship like this to exist. I could give my own first hand experience of getting into a relationship only to find out that the person is not who I thought they were. In addition, being white has given me access to certain conversations, and I have learned that many people who don't think of themselves as racist love to embrace their friends or loved ones of color as "the good ones," because it covers and justifies their animosity towards all the rest, or "the bad ones." Either way, just like any romantic relationship has a tentative period of exploring if the partner is really who they present to be, the interracial couple, specifically the partner of color, has the added burden of figuring out if their romantic prospect really sees their personhood, rather than viewing them as a fetish, a mark, or one of "the good ones."
And the trust curve is just one of the issues that interracial couples face. Even when the trust is granted and the issue settled, it can flare up again whenever racial unrest hits the community. Add to that the in-law issues, the looks from strangers in certain places, the additional factors in choosing a neighborhood to live in. My middle daughter is nearing those preteen years when she's becoming increasing interested in hair and fashion. She's become adamant about straightening her hair. I don't mind it as a style, but I have to be concerned that it's not coming from a place of self-hate. As it is, people doubt that she's her mother's daughter because of the girl's light complexion and blue eyes, even though she's her mom's clone in every feature except color. If she straightens her coily hair, lighter than her mother's in color, but similar in texture, is she separating herself from her mother's culture and genetics? Does she think her mom's hair is less attractive?
My older daughter has been through all that. Today, she is very light-skinned with barely wavy, dark hair, but chooses to think of herself as a type of Black person, even though she embraces both sides of the family. After a tragic event in the community that hit us both, she made the mistake of reading the comments in the news report and sent me the following text: 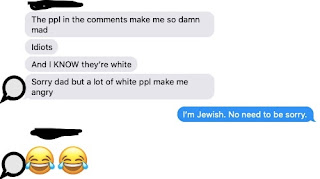 My mother is Jewish, but I think of myself as culturally white, probably because my siblings and I didn't know Mom was Jewish until I was a preteen (a wild story for another post). So in our multiracial home, my mixed daughter who thinks of herself as primarily Black has space in her sense of self to be angry with "a lot of white ppl," and her father, who thinks of himself as primarily white tries to channel her anger with my worn out "dad joke" about being Jewish only when racism enters the conversation. It's a tapestry we're weaving here. It's not always pretty, and it's got holes in places, but we've worked hard on it, and we love it, flaws and all.
Later in his thread, Howard gives another way of looking at these kinds of marriages, the tapestries woven from cultural and ethnic threads from both partners. He calls this type of marriage transcultural: 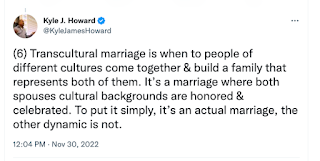 This definition hits me right in the lived experience. I've heard of interracial marriages being colonizer marriages or missionary marriages, and it's a rather ugly reality. When one partner dominates the culture and traditions of the home, or blasts any ways of thinking or being that they don't recognize and respect from their own background and upbringing, what results is not marriage, but a form of toxicity and abuse that can warp and destroy the home, the other partner, and any children as well. And at the end of the day, as Howard says, transcultural marriage is an actual marriage, where both partners are celebrated in what makes them both similar and different.
And in reality, while not every marriage has the same set of problems that an interracial marriage has, every successful marriage is a transcultural marriage in some way. Like Tolstoy wrote, "Happy families are all alike; every unhappy family is unhappy in its own way." I've seen marriages between two white partners where one's traditions and heritage were constantly belittled, where the in-laws were repeatedly ostracized and disrespected, where one partner's impact on the children was always considered suspect. The "culture" the mistreated partner brought into the marriage was never good enough, and it seemed to give the other partner a sick pleasure to think of their own family history and culture as superior. Wicked people thrive off of this false sense of superiority, and it may be the driving difference between what Howard calls a merely "interracial" marriage and a truly "transcultural" one. Heck, it may be the reason racist people seek out such partners in the first place.
In the next few weeks, I'd like to follow this up with some thoughts about how one would know if one were in a toxic interracial marriage or a transcultural one. I'm going to do some more thinking and reading on the subject, especially on the idea of whether an interracial marriage that is infected with superiority and condescension can ever really become transcultural. I'd like to think it can, but I don't want to be so naive as to ignore the struggle and change that would inevitably have to take place for that to happen. It reminds me of the ending of Ibsen's A Doll's House, when Nora says that in order for her relationship with Torvald to become anything but two strangers, the "greatest miracle would have to take place." She says she doesn't believe in miracles any longer, but I do. Still, I would be hard-pressed at the moment to say how that would happen in a situation like this, but I'll hold out hope.
Posted by Jeff Harrison at 10:52 AM